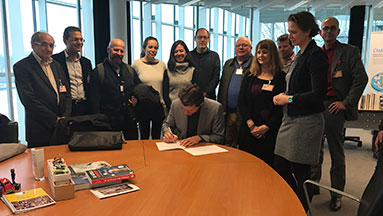 At the last SG (Steering Group) meeting, organised on the 15th and 16th of February in Utrecht, the Netherlands, the DATEX II PSA Cooperation Agreement was signed for the maintenance and further development of DATEX II for the provision of interoperable Intelligent Transport Systems and Services for road transport

The purpose of this Agreement is to establish and facilitate bilateral cooperation in maintaining, developing and improving DATEX II under the Grant Agreement under the CEF (Connecting Europe Facility) framework.

It sets out a mechanism for Beneficiaries to adapt their level of involvement throughout the duration of the Agreement in response to the Action, national and/or European requirements.

The implementation of the 2014-2020 Multi-annual Work Programme aims at contributing to the timely and efficient development of the transport core network, thereby further enhancing the effectiveness of the trans-European transport network, while promoting growth and job creation, in line with Europe 2020 strategy.

It is expected that this PSA will contribute to the achievements of the European transport policy objectives and the realisation of a robust and resource efficient European transport system compliant with European legislations and standards (i.e. the ITS Directive and its delegated Regulations, the standardisation request as regards ITS in urban areas.